Today I put ladders and art into the search and came first to V&A collections who in turn have a great image search engine.There are a number of images , sculptures, artifacts relating to ladders in the V&A collection.

The first was a card in the shape of a ladder called the ladder of matrimony. Artist unknown. I was not particularly drawn to this but it was the first to come up 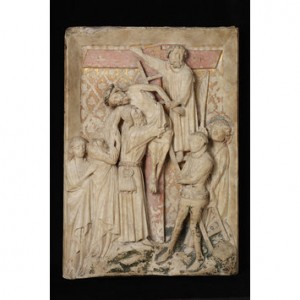 looking at the relief of christ coming being taken from the Cross I think of how christ looked up to the heavens at his father…Oh why have you forsaken me..Then men had to climb a ladder to bring him down from the cross. Down to their level. The ground in readyness to bury him. To dig. In this case to put him in a cave. I’m interested how the ladder in this case is to take down rather than bring up. IN this case the fruit is the dead christ. THe descent from the cross is a powerfull point in the story. Looking into other images on the dreaded Wikipedia I notice the ladder

Then returning to the card I notice that the fold, the join is tapered to a centre point. This could be seen as one ladder or two connecting. I reflect on the dynamics of my “matrimonial” relationship. Our challenges, were we devide and meet.

At the cross there were two women. his mother a Mary and his lover Mary Magdalaine. Ok I don’t know if Mary was his lover. The saved prostitute whose feet he washed. I charachter I have always been drawn to 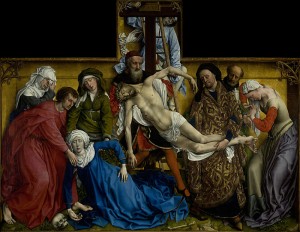 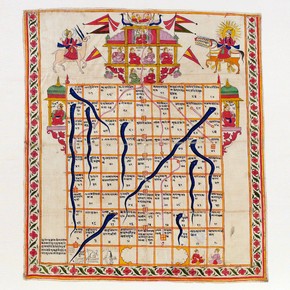 The ladders represent good behaviour that allows people to move to a higher level. The snakes represent bad behaviour leading to descent to a lower level. Every square has a lesson for life.

Excerpted from WITTGENSTEIN’S LADDER: POETIC LANGUAGE AND THE STRANGENESS OF THE ORDINARY, by Marjorie Perloff 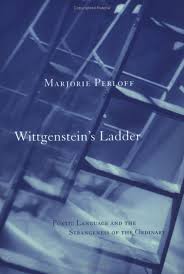 “He who understands me,” says Wittgenstein on the final page of the Tractatus, “finally recognizes [my propositions] as senseless, when he has climbed out through them, on them, over them. (He must so to speak throw away the ladder, after he has climbed up on it) . . . . then he sees the world rightly” (T #6.54). But no sooner is the world seen “rightly” than new obstacles appear which require new ladders. “Forcing my thoughts into an ordered sequence,” said Wittgenstein, “is a torment for me. Is it even worth attempting now?” (CV 28). 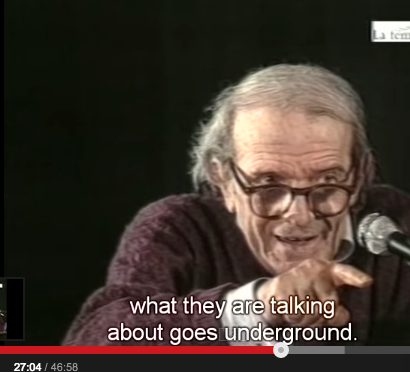 In this lecture “what is the creative Act?”  my attention was alerted around 26:41.

Deleuze talks about how as the words rise into the air what they are talking about drop into the ground. In french the word he uses through is not really how it is transalted. drop is closer to fall but The word Deleuze uses is enforcer. Which is more like to drive into, to push into.

Listening again I am struck by how deleuze specifically returns to say again what he means. Again the transalation of the subtitles does not catch the sublty .  However I do like this sentance

“or else this disjunctive operation holds no sence”

OK mot is word, parole can be words, but it is more to be given voice. Donne moi la parole

Then when he talks about the earth that we see S’enfonce. So it doesn’t simply drop away, it is also active

When he is more specific he talks of the Parole and what it is talking about pushes into the earth.

Later around 41:56 deleuze talks about resitence and returns to this disjuncture. In the work of jean marie straub…….the visual is not directly linked to the audio.

Whilst the act rises the object descends……resistance 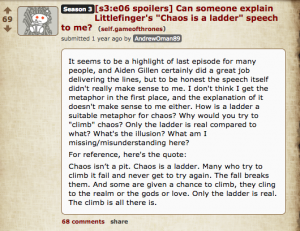 “Chaos isn’t a pit. Chaos is a ladder. Many who try to climb it fail and never get to try again. The fall breaks them. And some are given a chance to climb, they cling to the realm or the gods or love. Only the ladder is real. The climb is all there is.”

A rather simplistic explantation of the jacob and angel story that has a few interesting tangents. Listen to the audio link on this link